Back on track AND

"I am so much betterrrrrrrrrrrrr....than befoorrrrrre!!!!" (clearly singing the song from Legally Blonde, the Musical)

Perhaps not so clearly talking about the fact that

1st off: I'm back on track in terms of writing 1 extra post per month this year (if you pretend that February never happened)

And 2nd: I am SO much better than before when, in the Fall, I had what was nearly a full on panic attack when the BFF and I were killing time before a Fordham Law fundraiser and I had to try my damnedest to continue to breathe while eyeing W 56th Street from the East side of 9th Ave.

He laughed until he realized I was seriously short of having a stroke as we strolled past the laundry mat (now closed - likely because of how many batches of linens bearing bed bugs were done in their machines) where I logged a scarring amount of hours during December of 2009 and lost easily hundreds of dollars and what's more, my marbles.

But I know I am SO much better, because in the past two weeks on my long Sunday afternoon Half Marathon training runs, I've looped up 12th ave and made my way east towards 8th ave by cutting right in front of the dreaded 418 W 56th (two weeks ago on the opposite sidewalk, and this past Sunday right there on the even numbered side - of course both times with heart pounding aggressively behind my sports bra and not without staring at the ground and the various piles of trash wherein I might have been able to spot the tic sized terrorists).

So here we go, friends. Onward into April :)

Look forward to a lucky 13 entries in the four weeks to come - I have a feeling April's going to be be full of fun things to muse upon as my wall calendar's got Sister Friend Actress Writer Agent Nomad and even Princessy events noted in the days between now and May.

And what's more...I'm ending on this sunshiney singsongy note, because sure there's talk of a blizzard blowing in tomorrow and it "not being an April fool's joke," but that's nothing a little Junice can't handle. Snow (& showers & her freakish little doll hands) bring the flowers that bloom in May! 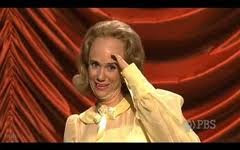