Behind the ball from behind my wall

I love it - the pressure is on! I've got another awesome article to post tomorrow or Friday from my dearest oldest friend in DC, and so that means I better hurry up and write about what the Celebrity Relationship Expert had to say so I can get back on the ball here in the blogosphere.
I've also got to chat about the delight that is http://www.openeyedsneeze.blogspot.com/ within the week. So without further ado here's what she had to say...
"So you're telling me," she's smiling, smiling, she takes a dramatic pause for the camera, since after all she's shooting this with the hope of being granted the privelege of producing a full pilot before the New Year, and she's gunning for her own network TV talkshow in time for 2011's Spring Sweeps, "you'd date a compulsive gambler, or an alcoholic so long as he was 6 feet or taller and never planning to live in Connecticut?"
::nervous laugher from Sassy Single Naugs::
"You really are more worried that your friends and family seek out "suitors" for you who's sensistivity levels aren't threateningly effeminite and who are college educated and regular-joe shoe wearing vs interested in being loving, compassionate, caring, invested in and communicative with you?"
Shit.
She told me this was a defense mechanism, this list of mine, she said I've built up a wall as a result of breakups past, she said I shouldn't worry about "giving too much" to the next guy who may very well be deserving of my time, love, commitment, because in giving we receive, and she told me the work that needs to be done is on myself...
Errrr... check please? My interview lasted all of 25 minutes. It garnered some great laughs from the executive producers and PAs who were in the room for the filming. And it left me shaking in my boots and seriously considering entering therapy at the start of 2011.
Not two days later, my fashion forward modmate bemoaned her mother having sent her this article. Arguing that its message has always been her "thing" - "how can you expect someone to want to date you if you don't want to date yourself?" She (we'll call her Hips) thought she'd be justified in telling her mother not to talk to her ever again for assuming she hadn't already been working to strengthen the pillars of her emotional core - self-esteem, attitude, happiness, kindess & compassion.
I for the most part am on board with this goldfish guy's sentiments though. And particularly after receiving the instruction from the celebrity relationship expert to start working on strengthening those pillars and breaking down the wall I've built up around myself if I'm serious about wanting to someday re-enter a healthy relationship with the right one.
So add it to my list of New Year's resolutions I suppose: 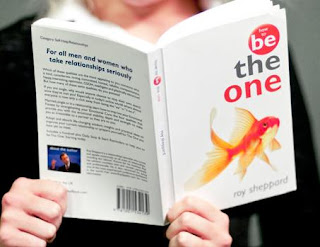