A few firsts of note

Was thinking about my first time tonight - how special it was.  It was in New Mexico.  And I honestly had no idea what the guy was doing.  Because I'd given him my keys and thought he was going to drive, but when he walked over to the passenger side door, I said, "oh you want me to drive?" and he shook his head as if to say, you silly silly city girl.

"I'm opening the door for you."

He was opening the door for me.  It was the first time a gentleman had actually gone and done that so matter of factly and deliberately at the same time.  It was the first time a guy had done that for me when I wasn't you know, carrying cupcakes, or Christmas gifts or something of that nature.  So naturally I spazzed.  I may have blushed, cause I was literally tickled pink at the thought.  And I sort of guffawed because I was so genuinely surprised and entertained by the gesture.

And anyway - on the west coast it's common for guys to get the door for girls I think.  Or else maybe I've only been meeting Southern transplants, but either way, what's sad is that the novelty's worn off.  It will never be as magical as it was when it happened in Enchanted NM.

The first time you fall in puppy love's pretty irreplaceable too.  I mean puppy sighs sort of puppy love.  Literally when the puppy that is yours without a doubt first senses you've had a terrible day at work, or you're so tired you can hardly keep your eyes open, or most of the people you love most in this world are thousands of miles away at present, so he snuggles up on your lap, or in the crook of your arm or with his head right on your shoulder if it's night time and you're saying your prayers.

I remember the first time my parents' dog, Rusty, sensed I'd really been hurt by a recent break up and he followed me up stairs and slept at the foot of my bed.  I love that scruffy looking, underbite yielding, fourth position footed pup, don't get me wrong, but Little B's the best thing I can imagine bringing into the picture on a "make better bad decisions in 2014" whim and wow does he fill my heart with real deal maternal love for the first time.

That's all she wrote tonight, folks, but at least she wrote! 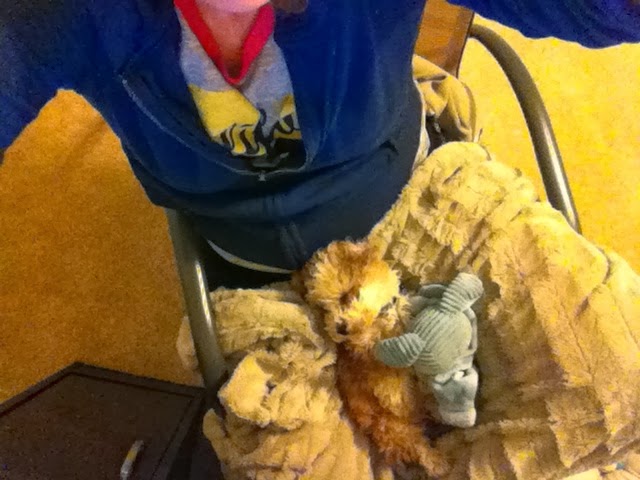