Some things of note:

1st: Google / Googling.  Have people stopped to think about the ease with which one can be googled?  Namely, have I stopped to think about it?  I know exes have googled me, and I once had a cast mate in a show who was probably 7 years old at the time tell me he was impressed by the fact that I had three pages of relevant stories come up when he googled me, and then apparently there's a rancher in Aurora, CO who googled me just a couple months ago, but like, who else is likely to?  My artists?  My clients?  My future literary agent?  And honestly how easy is it for anyone and everyone to do?

2nd: GLEE.  So today I helped out a friend from Boston College by being a background actor for an episode of a web series she's shooting.  It was a low key and relatively fun way to spend a Saturday morning (hurry up and waiting) at a swanky apartment on the Upper Upper West Side, but the highlight was when the PA designated my role in the scene as that of a college intern trying to get a job out of the random conversations she was having at the party.  College?!  Me?!  Thank you dahhhhling... What's more, she told me, in front of a couple of the other actors, she really would have believed I was college age, and what's more, she could see me on Glee playing one of those high schoolers.  At which point my college friend told her I sing well, and so the PA went on, "go then, you should go be on Glee" and so I said "okay" much to the amusement of the other actors.  I've never had one of those moments where someone says it so nonchalantly, "you should be... go do" - I know it happens to other actors all the time.  Their family members say "you should be on Broadway," "why don't you do that soap that shoots in NYC?" but I guess I'm surrounded by practical people with more realistic expectations and somewhat of an understanding of the uphill road to being an overnight success 10 years in the making.

3rd: Speaking of 10 years in the making and life/careers/relationships and really all things worthwhile being a marathon not a sprint.  I just ran 7 miles wearing my Boston Marathon Runner shirt.  In honor of Boston 2013 being two days from now and that 7 being the farthest I've run since Boston 2012. 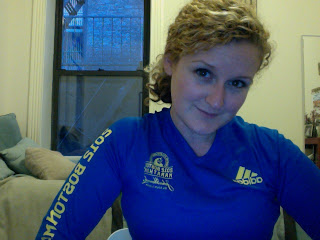 But I'll be darned if I don't take what I learned in marathon training/running last year and apply it to things in my life on a daily basis.  We run for our cause, we run cause we can.  In it to finish it.  A journey of a thousand miles begins with a single step and all that.  Not to mention, RWE's 'what lies behind us and what lies before us are tiny matters compared to what lies within us.'  When you set out to accomplish something, stick to it, get'er done, it is so invigorating and so inspiring.  It's addictive.